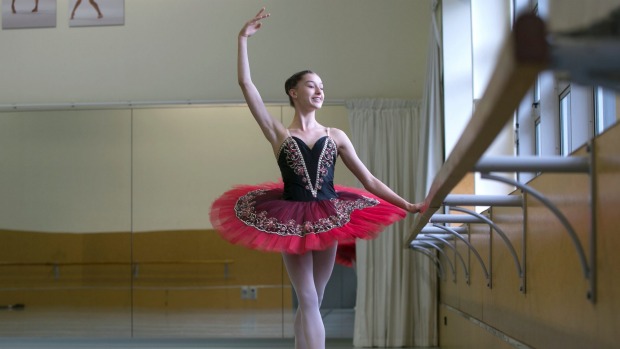 Over the past year, 13-year-old Macy Cook has spent four hours a week practising a ballet dance she will perform for less than two minutes.

When she pirouettes in her pointe shoes on the St James Theatre stage this weekend, the Wellington ballerina won’t have long to impress the judges. Competition is intense in New Zealand’s only international dance competition, the Alana Haines Australasia Awards. In her age group, the Wellington East Girls College student will be up against around 230 dancers, many of whom come from across the Tasman, lured by $400,000 of prize money and scholarships. In this competitive dance world, a growing number of teens are also dancing full-time, at dance schools that combine academic studies with full-time training.

First donning ballet shoes at age seven, it is the second time petite, graceful dancer Macy, will compete in the Alana Haines biennial dance competition. Two years ago, she made it to the quarter-finals of the competition, which showcases Australasia’s most promising young dancers.

Practicing her solo piece, Kitri’s Wedding, from Don Quixote, Macy is happiest when she is dancing. Each week, she spends 16 hours learning different styles at the Wellington Dance and Performing Arts School and Step Out Dance Company in Kilbirnie.

“If I have a bad day at school, and I come out to a ballet class, I feel so much better,” says Macy, who is also a New Zealand School of Dance scholar and junior associate. She hopes to make a career out of dance.

The Alana Haines awards were set up in 1990 by former Royal New Zealand Ballet dancers Katie and Greg Haines, in memory of their 11-year-old daughter. Alana was just 11 when she was killed in a car crash on Christmas Eve 1989. A day before, the honours dance student had performed before a 1500-strong audience.

A photograph of Alana’s sweet face beams out from the competition website.

In its 27-year history, the event has become the creme de la creme of the dance world, when future stars in the making compete in the event which lures international judges. They can win scholarships to some of the world’s top ballet schools in Europe, the United States and Australia, including the Paris Opera Ballet and English National Ballet School. Winners often go on to dance with major ballet companies overseas.

Of New Zealand’s past winners, Hannah O’Neill is now a principal with the prestigious Paris Opera Ballet, while Vida Polakov won her category, and is now dancing with the West Australian Ballet Company. Ariana Hond, a junior artist with Melbourne City Ballet, will appear as a guest dancer in the competition finals evening. The Royal New Zealand Ballet is stacked with previous winners and finalists, such as Catherine Grange and Felipe Domingos.

With the competition run by volunteers, Katie Haines says it offers artistic development and financial assistance for talented dancers aged 11 to 18. But unlike other prestigious dance competitions around the globe, there is no audition. “We don’t want to cut out people who can really get inspired by other dancers and also really improve through the whole process of rehearsing a dance.”

In a New Zealand School of Dance studio, director Garry Trinder watches two students rehearsing their dances. Full-time, second-year classical dancers Tabitha Dombroski and Saul Newport are both 17. Along with six other dance students, they have been handpicked out of 87 dance school students to enter.

Says Trinder: “The entrants are dancing some of the benchmark dances that some of the world’s great soloists dance, and on which they will be judged. They dance on their own, on a full stage, with a full auditorium watching them. You really do get to see stars in the making and it’s a really great chance for New Zealand to host this too.”

When he joined the school 19 years ago, Trinder recalls the dance competition was tiny, and run in Victoria University’s Memorial Theatre. Over almost two decades, the dance scene has exploded, and there are now high school students combining dance with academic studies, through schools in Auckland and Christchurch.

Starting dancers very young is rife in Australia, where many of the Alana Haines competitors are often in full-time dance training from as young as 12.

Trinder says the Australian dance scene is much more cut-throat.

“It’s such an ageist profession. It’s very challenging because, if you start too young, you can burn out.”

“It’s an aggressive market. The dance world can be very competitive and intense,” he says.

Tabitha has danced in the competition three times before, last time going through to the quarter-finals and receiving a scholarship. Her mother danced, and she grew up surrounded by pointe and ballet shoes. She left school at the end of Year 11 and hopes to be offered a place with the Royal New Zealand Ballet one day.

A fortnight after they compete, Saul and Tabitha will represent the NZ School of Dance at the Assemble Internationale at the Canada National Ballet School in Toronto.

On a recent Sunday afternoon, En Pointe dance school owner Cindy Gordon oversees six young dancers rehearsing their set pieces. Some of the 11 to 15-year-olds have been mastering their solos for up to two years.

Gordon only allowed her top students to enter, along with those who could afford the extra rehearsal times and the cost. They’re all dancing a variation, which Gordon says is a privilege – pieces from classical ballets such as Swan Lake, usually only performed by ballet stars and soloists.

Of the 11 and 12-year-old dancers, only about 60 of the 140 entrants will get through to the quarter-finals. But Gordon is philosophical.

“We don’t get the opportunity to be on the international stage that often and it’s exposing the girls to what it would be like to dance at an international level. The girls are watching each other as children. They can relate to seeing each other onstage.”