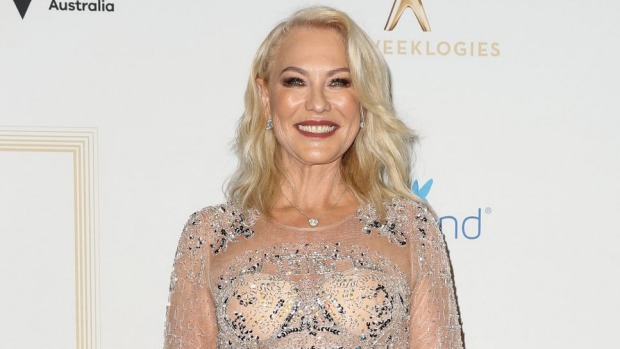 After half a century appearing on Australian TV, Kerri-Anne Kennerley has become the third woman to be inducted into the Logies Hall of Fame.

The 63-year-old looked stunning in a floor length gown with sparkling silver crystals as she accepted the gong.

“Thanks for the ovation, I’m chuffed with that, Kennerley said.

“I’m not going to use this beautiful salubrious occasion to lampoon or roast anyone because I have a book out at the end of the year for that.”

“I’m very proud to say that in the last 50 years I have always managed to earn a living in the business that I love the most, the media.”

Kennerley started her started her long TV career in children’s shows Everybody In and The Channel Niners at the age of 13.

She is the third woman to be inducted into the Hall of Fame since its inception in 1984, following Ruth Cracknel in 2001 and Noni Hazlehurst last year.

Kennerley’s interviewed everyone from Madonna to Donald Trump to Priscilla Presley and even got former Treasurer Peter Costello to do the macarena and Kevin Rudd to dance the cha-cha on her show.

Amanda Keller, who presented the award, said Kennerley was a “queen of reinvention.”

“She is as smart as a whip, as funny as all get out, and, as we saw with Full Frontal in the ’90s, she is able to laugh along when someone takes the p—,” Keller said.

“Oldies love her, parents love her, kids love her. I suspect babies are born with KAK in their DNA..”

TV legend Michael Parkinson spoke in a video tribute to Kennerley and said she had a warmth that just made people fall in love with her.

“She is a deceptively good interview, I would say,” Parkinson said.

“She doesn’t have to go thrashing around and criticising people and shouting to be a good performer. I mean, she very quietly gets out of people want she wants.”

The honour comes after a tough year for Kennerley. Her husband John broke his neck in a fall while on holidays last year in Coffs Harbour. He returned home at the end of last year after a lengthy stay in hospital.

John supported his wife at the awards on Sunday night, arriving in a wheelchair and in good spirits as the pair celebrated their 31st Logie awards together.

Kennerley said she would give it all up to have him standing beside her on stage.

“I can honestly say I would give away 50 years of this career and all those incredible experiences and anything else I could think of just to have you standing right here by my side holding my hand,” she said.