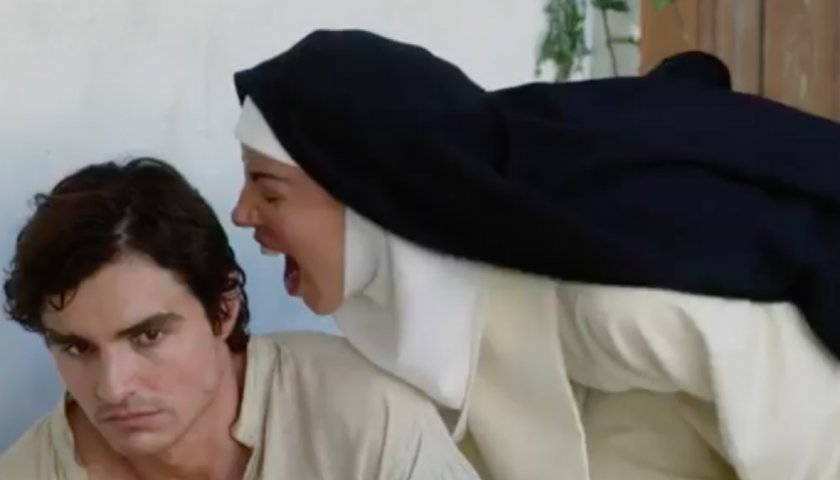 Slated for a June 30 release, The Little Hours is centered on a convent of nuns in the 13th Century, and based on an excerpt of Giovanni Boccaccio’s The Decameron. The first time we hear one such nun, Sister Fernanda (Aubrey Plaza), speak in the new red band trailer for the film is after she’s warmly greeted by an unassuming man rolling a wheelbarrow. “Beautiful morning,” he says quietly. She shoots him back a nasty look, outraged. “Hey, don’t fucking talk to us!” she yells. “Get the fuck out of here!” So, yeah: In case you had any doubts, The Little Hours is definitely not your mother’s Boccaccio.

The raunchy, profane Little Hours premiered to strong reviews at the Sundance Film Festival—as well as some outcry from religious groups, as the trailer is all too happy to point out. (“It is trash,” the Catholic League said of the film. “Pure trash.”) Plaza co-stars with Alison Brie, Kate Micucci, and Molly Shannon—among many others—in a movie that promises to deliver some deliciously sinful religious satire. In this trailer alone, you can watch Plaza tell more people off (“Mind your own fucking business!”), scream in Dave Franco’s ear, and convincingly wield an axe. It’s not the Boccaccio adaptation we were expecting to premiere at Sundance, but it looks like one hell of a good time.