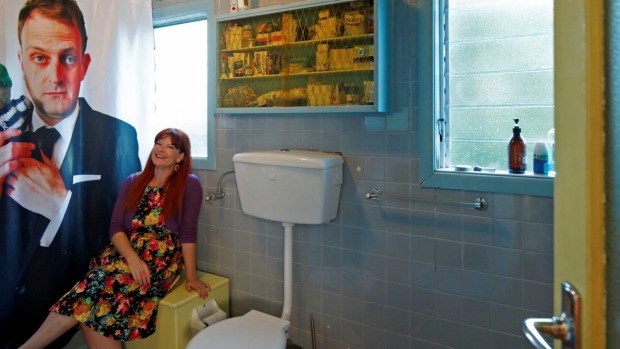 Penny Ashton, 43, is an actress, comedian, celebrant, and “all-round show off”. She lives in Sandringham, Auckland, with her husband Matthew Harvey, 41.

We’ve lived there for almost 7 years. It’s the flat my now-husband and I moved into when we first decided to live together. We’d been going out for about 10 months. We don’t own it, because, don’t be ridiculous.

The landlord grew up in the house. It was decorated in the 70s and nothing has changed, which we love. It’s got polished cork walls in the kitchen, which is painted turquoise and yellow. The bathroom has crazy wallpaper – it’s purple and turquoise with a really elaborate pattern.

It’s got this really groovy retro feel – we love the house. We’ve got a formica dining table and a giant, 3-seater, pink velvet couch, and a turquoise couch – it’s all very colourful. It suits me particularly. My husband just sort of goes, “Whatever darling.”

My husband is also a performer, and a poet. He was doing a show called “Danger Man” – we did this photoshoot that was kind of James Bond-y. I needed a new shower curtain and I found this site which prints them. He came home one day from work and I was like, “Go to the bathroom.” He was like, “What the f…!”

Whenever anyone goes to the toilet, they look at him.

We don’t have pets, or kids. I had a plant once but it died. That’s the most responsibility I want in my life. We have a tonne of fake plastic flowers all over the house because when we got married that’s what we had at the wedding.

I like the fact the house is open-plan – I do all the cooking, and we can talk to each other while he’s in the lounge. We spend quite a lot of time binge-watching TV – the couch is a very good snuggle site.

The landlord recently painted the outside of the house. We had painters Fred and Dan outside for three months, who became quite good mates. By the end they were buying me coffees, they were delightful.

I do a lot of travelling with work, and love to collect fridge magnets. I’ve also just made Matt some pictures for the walls – I drew a cartoon of a pig wearing a swan costume – Bjpörk – and one of a pig DJ with the caption “Pork scratchings.” I was very pleased with them. I did MC Hammer, Hamlet. I gave them to him for our first anniversary a few weeks ago.

Penny Ashton will perform her Charles Dickens solo musical, Olive Copperbottom, in Auckland from April 18-22, and in Wellington from May 9-27.