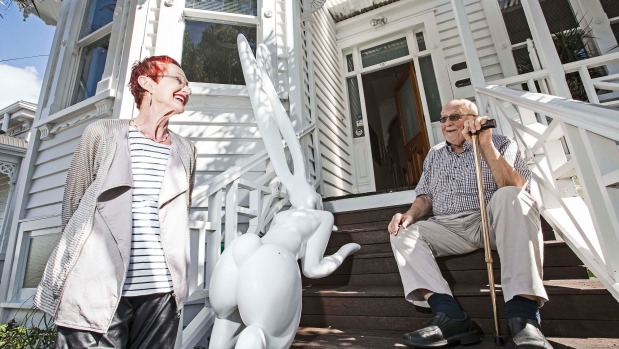 “Artwork is part of who we are. We couldn’t live without it.”

Anyone stepping into the century-old villa owned by art identities Magda Van Gils and Frans Baetens would never doubt that statement. From the fibreglass white rabbit on the stairs, created by sculptor-designer daughter Saskia Baetens, to the fabulous Giuseppe Romeo tables inside, art dominates the house, both inside and out.

But tomorrow, the villa that has hosted dozens of overseas artists, and thousands of gallery visitors, will be going under the hammer, at a 6.30pm auction held by Ray White Ponsonby.

It will be the first time the house has been up for sale in 32 years and the sale will be a far cry from the original change of ownership.

The house formerly belonged to artist Tony Fomison, who had become a close friend of Van Gils and Baetens – he even helped them into the property. To provide funds for the couple’s deposit on his house, Fomison created numerous lithograph designs for them to sell. Their fees from those sales provided the house deposit for the recent Belgium immigrants.

For more than three decades, the house has been more than a family home. It accommodated the celebrated Muka Gallery for several years, before it moved to Ponsonby Road, And for nearly 30 years there was a huge lithographic printing machine in the basement gallery space, which Baetens imported from France.

“It was just the same model as the machines used by Picasso and Matisse,” he says. The printing press has been shipped down to the Eastern Southland Gallery in Gore where it will be reassembled.

Van Gils, a trained photographer and Baetens, a sculptor and printmaker (and former priest and paratrooper) had already established a workshop in Brown Street, which was eventually replaced by the home studio. Over the years the couple not only ran the Muka Gallery, but also printed thousands of numbered lithographs of works by international and local artists.

Many of the smaller prints have been bought by children in a special initiative set up by the couple – the Muka Youth Prints Project.  The pair still tour the country to give children an opportunity to buy affordable art. They describe it as “an underground operation”, with families hearing about the exhibitions via email or word of mouth.

“The names of the artists, many of whom are very well known, are all covered, and the prices are all the same,” says Van Gils. “It’s not about the money, the value or investment; it’s about encouraging children to look at the art and buy what they love. Adults are not allowed into these exhibitions.”

But their other artworks can be found throughout the world – from Greymouth to Cologne. And around 3000 printer’s proofs were purchased by Te Papa.

The couple, who chose to emigrate because they were living near nuclear amenities, have clearly never regretted their move. But, for mobility reasons, they now need to live in a house without stairs, and are moving to a house in Sandringham, several doors away from daughter Saskia and architect son-in-law Tom Rowe.

“Saskia and Tom are designing a renovation, so the new home will be adapted to our needs,” says Van Gils.

But for now, their attention is focused on selling their house in Chamberlain Street. Visitors to the open homes probably don’t recognise the significance of many of the features, including the semi self-contained suite on the lower level, which has been used for visiting international artists.

There’s also a knotted rope hanging from a beautiful pohutukawa tree at the rear. “See that rope,” says Baetens. “That was put there so Tony Fomison and Allen Maddox (artist) could climb the rope and sit in the tree with a bottle of gin, watching the sunset.”

Daughter Saskia Baetens says she remembers the day she first saw the house as a young child. “It was definitely the worst house in the street. It was painted blue and there were five layers of carpet and fleas – the locals called it the eye sore because it was so ugly. Tony Fomison had even put a fake ‘Halloween-style’ tombstone out the back because he didn’t want anyone to go down there.”

But Baetens says the artist did have quite a sense of humour. He created a nameplate for the front door, which said, in beautiful cursive writing: The Eye Saw.