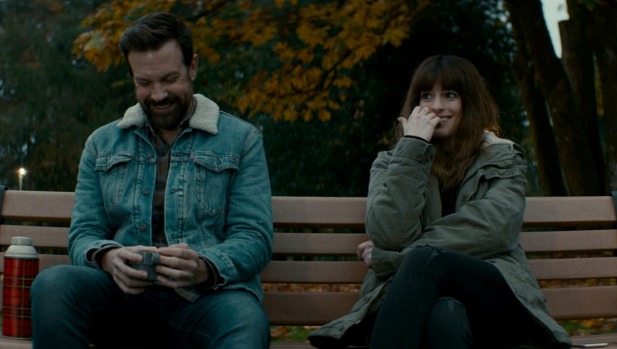 Colossal is the rare movie that defies description. “I was talking to our director [Nacho Vigalondo] and I said, ‘This is a difficult movie to sum up’,” Anne Hathaway says. “He said, ‘Well, I just tell people that it’s a movie about how when a woman gets drunk, a gigantic monster attacks South Korea’. Not bad, right?”

But a mere sentence can’t fully capture what’s so unusual about Colossal, which opens in New Zealand on Thursday.

The sci-fi comedy follows a flailing alcoholic named Gloria (Hathaway), who moves home after her boyfriend (Dan Stevens) kicks her out. After reconnecting with a childhood friend, Oscar (Jason Sudeikis), Gloria starts working at his bar and falls back into old habits, stumbling home through a neighbourhood playground every morning. It’s only when she watches the news that she realises a Godzilla-like kaiju attacking Seoul is mimicking her drunken actions during those hours, forcing her to confront her addiction.

After shooting The Intern and Alice Through the Looking Glass in 2014, Hathaway, 34, was looking for a more left-of-centre project.

“I had been sent a lot of good, but very commercial scripts, and I just wasn’t connecting to them,” Hathaway says. “I gave my agents the directive, I’d like to do something a little bit weird. This one arrived and it certainly fit the bill.”

Sudeikis, 41, saw hints of genre-defying 90s movies Joe Versus the Volcano and Being John Malkovich when he read it. The latter, particularly, “is so iconic and singular to those couple people that made it”, he says. “That’s definitely one that popped to mind.”

For Vigalondo, “there’s nothing more exciting than putting a familiar face in a different context”, he says. “As soon as I knew Anne was interested, I got really excited, mostly because I had the chance to push her different ways.”

Gloria’s alcoholism was familiar terrain for Hathaway, who was nominated for a best-actress Oscar playing a recovering drug addict in 2008’s Rachel Getting Married. (She won best supporting actress in 2013 for Les Miserables.)

“Some of the addicts I know are the most alive people I know, and I think that translates really well in these stories,” Hathaway says.

As someone who has been labelled “phony” and “unlikeable” by online critics (spawning the name “Hathahaters”), she could also understand Gloria’s frustration with the men in her life constantly putting her down.

“People have become full of regard for their own opinions and give them very cheaply,” Hathaway says. “I certainly related to that.”

Gloria’s most oppressive foe winds up being Oscar, whose rapey vibe and deep-seated resentments come to light in Colossal’s twisty second half. It’s a shockingly dark character for Sudeikis, a Saturday Night Live veteran known for raunchy comedies Horrible Bosses and We’re the Millers.

“The reactions have been fun,” Sudeikis says.

“I was aware of the male-female [themes of the movie], but I also understood that boys have the opportunity to wake up every day and use systemic sexism to their benefit.”

In light of January’s Women’s March and planned cuts to reproductive healthcare under US President Donald Trump’s administration, both actors think Colossal’s flawed but empowered heroine could resonate even more strongly now than she did at the movie’s Toronto International Film Festival premiere last northern autumn.

“It’ll be interesting to see what it’s like for people six months after the election,” Hathaway says. “The timing of this one couldn’t be more apt, unfortunately.”