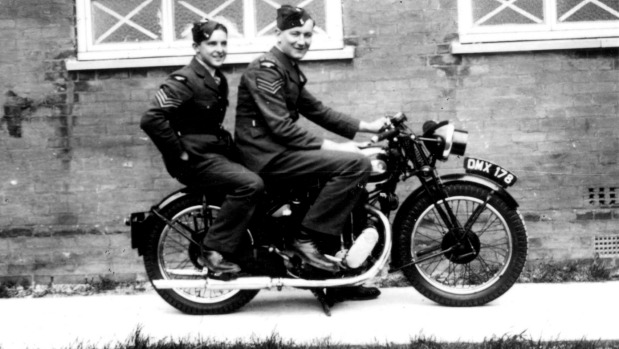 It’s heartbreaking to imagine the dread that wartime mothers must have felt when a telegram arrived.

For my grandmother sitting in her villa in Auckland in August 1941, it heralded the prospect of an agonising and interminable wait, not knowing if ‘Missing in Action’ meant her son, Ian Walker, was dead or alive.

But a letter, mysteriously smuggled out of Nazi-occupied Europe, would soon put her mind at rest.

It was all thanks to the intersecting fortunes of two Wellington bomber airmen who never even met. Born only 16 days apart in 1920, on opposite sides of the world, Sergeant Jack Newton of England and Sergeant Ian Walker of New Zealand both became air gunners at the outbreak of war.

Sergeant Newton flew numerous operations to bomb Nazi Germany with his 12 Squadron crew, while at the same time Sergeant Walker was undertaking death-defying missions with 115 Squadron.

Many never made it back from this dangerous work with RAF Bomber Command, and Walker and Newton knew the odds of being killed in action were high. Walker had even written a letter to his family to be delivered in the event of his death, expressing his regret at the pain and sorrow he knew his death would cause his loved ones.

During the evening of August 5,1941, Newton and Walker were both detailed for ‘ops’. Newton’s crew took off from their base in Lincolnshire at 10.25pm with a full bomb load, destined for Germany.

Twenty-two minutes later, Walker’s crew also set off into the night skies, headed in the same direction. Cocooned in the perspex gun turrets of their respective Wellington bombers, Newton and Walker had no way of knowing they would be forever connected by the events that followed.

Utterly alone in the skies above occupied Europe, they were two young men in the prime of life, running the gauntlet of fighters and flak. For both men, this sortie was about to become their most eventful, each crew running into serious difficulty over Belgium.

Both aircraft crash-landed, only 15 minutes and 50 kilometres apart. Newton and Walker miraculously survived, but this is where their fates began to diverge. Newton managed to evade capture while Walker, with his leg badly broken, became a prisoner of war.

Initially cared for by kindly nuns at a hospital in Leuven, Walker found himself locked in a room alongside fellow crewmember, Sergeant Donald Boutle.

Walker knew his parents would have been informed that he had ‘failed to return’ and was mortified that they wouldn’t have known he was very much alive.

Understanding how upset Walker was, one of the nuns risked the wrath of the German guards and smuggled in a pen and paper, telling him mysteriously: “I know someone who is going to England. If you write a letter to your parents they can post it from there for you.”

Greatly relieved at the prospect that his parents would learn he was alive, Ian Walker penned them a note. He also wrote to Donald Boutle’s parents and gave both letters to the nun.

In time, the letters arrived in the letterboxes of Boutle’s parents in England and Walker’s in New Zealand, with news that their sons were alive bringing tremendous relief. How the letters were smuggled out of Nazi-occupied Europe remained a lifelong mystery to Ian Walker, though he was forever indebted to the courageous nuns. He even returned to Leuven, six decades on, to thank them personally.

The mystery of the letters may never have been solved if not for the power of the internet to bring people together. Seventy-five years later, I was able to fill in the blanks while researching and writing my late father Ian Walker’s story – From Battle of Britain Airman to POW Escapee.

Back in 1941, Sergeant Newton was helped by daring members of the resistance along the Comete Escape Line, and audaciously made his way through Belgium, France and Spain to Gibraltar where he got on a ship and became the first RAF airman to make it safely back to England.

Remarkably, one of the people who helped smuggle him out of Europe was in contact with the kindly nun in Leuven, and she had secretly arranged to have the letters given to him. On arrival in London, Sergeant Newton posted the two letters.

Sadly my father’s parents didn’t keep their letter. But, more than seven decades later, the letter written to Boutle’s parents and a hastily scribbled letter of explanation from Sergeant Newton, were sent to me in New Zealand by Boutle’s daughter. The mystery of the letter was finally solved and with it came a tale that demonstrates the power of what is possible when people act with courage and compassion.

To begin with the identity of the writer – my name is Walker – “Cobber” – who you so kindly put up with for a night. This is to give you some news of Don. He and I are in a military hospital. You must not take this as official – it is without the consent of the Germans and I hope to get it to you in a comparatively short space of time through the aid of some friends here. Don has fairly bad concussion – no fractures though. At the present time he’s getting much better and is out of all danger so you need have no worries on that point. He is just a little too ill to understand much although he knows me OK. The doctor says he will be as good as new in about six weeks.

We came down in the middle of Belgium and found the Belgium people very much on our side. They wanted to kiss us. None of the other members of our crew were injured at all. They now reside in a prison camp in Frankfurt. That’s where we will go when we are fit again. My only complaint is a broken leg.

The food is pretty rough, especially the ersatz bread. Well for now au revoir and I’m sure Don sends his love. Don’t worry.

P.S. Remember the channels whereby you get this letter are secret.

* From Battle of Britain Airman to POW Escapee: The Story of Ian Walker by Angela Walker (Pen & Sword Books, $60) is out now.