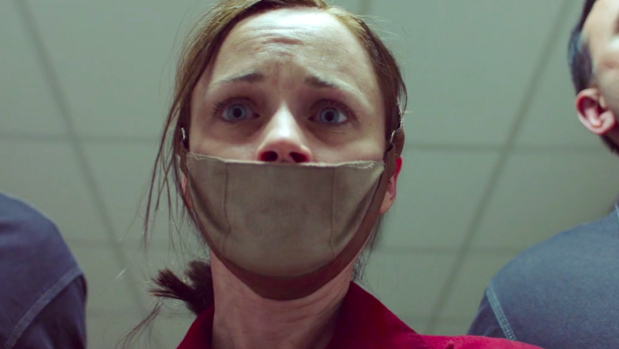 OPINION: That sound you hear is a million heads being banged against a million glass ceilings because now even the star of the new television series The Handmaid’s Tale doesn’t want to use the F word.

Elisabeth Moss stars in the TV adaptation of Margaret Atwood’s famous 1985 novel, playing a woman who is a forced reproductive concubine living in a misogynistic dystopia. But Moss, who also starred as Peggy Olsen in Mad Men, is not convinced The Handmaid’s Tale is feminist.

The show premiered last week at At the Tribeca Film Festival. During a question and answer session after the screening, Moss was asked if she considered the story to be feminist in nature. Moss was dismissive of the suggestion.

READ MORE:
* My very first Bachelor experience confirmed worst fears
* I listened to Harry Styles’ new single so you don’t have to
* Adele: She may be one of us, but she says nothing to me

Well, I hate to break it to you Elisabeth but The Handmaid’s Tale is ALL about feminism. It is impossible and unforgivable to say or think otherwise.

And in case Moss can’t actually remember the script, can I please remind her The Handmaid’s Tale presents the story of a near-future patriarchal dystopia, where women are forbidden from reading or using money and are categorised by their supposed virtue and utility as child-bearers. Now, I don’t know much, but I do know a feminist story when I read one.

And it appears the author agrees.

The Handmaid’s Tale author, Margaret Atwood, appears to take a slightly different view. ”They needed an ‘only’, an ‘also’ and a human right definition of the F words, IMHO (in my honest opinion),” she tweeted to a Twitter user who asked for her thoughts on Moss’s ”It’s not a feminist story – it’s a human rights story” zinger.

The irony of Moss’s declaration that ”women’s rights are human rights” will be lost on few. That phrase has been a feminist talking point for decades, most strongly associated with Hillary Clinton, who uttered the now-famous words during her 1995 speech a the United Nations Fourth World Conference on Women in Beijing,

It is difficult to understand, baffling even, to learn the cast behind a series that delivered such a strong feminist message seems reluctant to associate with the movement itself.

The word ”feminist” has long been a lighting rod for unfair and untrue criticism from certain sections of the community. Say you support women’s rights and you are accused of being against men’s right. Say you are a feminist and you are man-hater, spreading misandry with your tiresome marches. I’ve even seen the argument put up, by a woman no less, that the fact women get paid less than men is ”fantastic” because it means us lasses can stay home and have babies.

And what makes all this even more infuriating is the PR and marketing department for The Handmaid’s Tale, accutely aware of the pain and despair felt by so many as they watched a man who openly brags about sexually assaulting women elected to the highest office in America, had been going at warped speed this past few months to tout this as the feminist event for 2017.

But with one poorly-thought through comment Moss has pretty much told us all that we fell for a one big marketing gimmick and if we are searching for an inspiring feminist story to heal our wound and act as a call to arms we should look elsewhere.

But despite the marketing department’s probable relief that they can now sell the series as more mainstream there is no doubt the F word will continue to follow The Handmaid’s Tale – and its stars – for the foreseeable future.

But rather than keep labouring over what Moss did or didn’t say I shall instead focus on the sentiment that runs through the Hulu series, the original book and all those who read it and loved it and will no doubt love the new screen version too: Nolite te bastardes carborundorum.

Don’ let the bastards grind you down.

The Handmaids Tale is available on Hulu in the US.  There’s no NZ air date for the show yet.