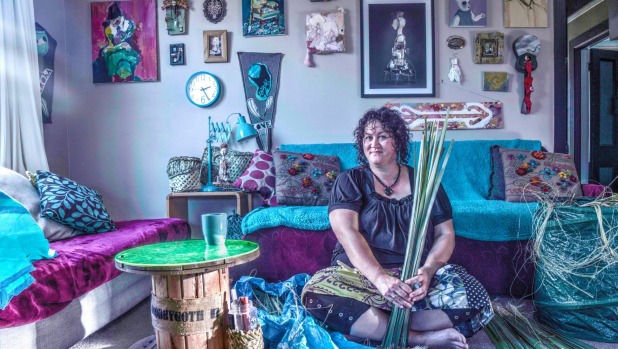 Palmerston North artist Pania Molloy doesn’t go through a day without making something. Carly Thomas visited her at her home studio.

The natural habitat of Pania Molloy is comfy, cushion-filled and copious. The colour scheme is evocative of the remnants of a painter’s palette and three chihuahuas hold court, perfecting the decor with their anomalous quirk.

The genealogy of Molloy’s art can be tracked in her house. In a glass cabinet some of the ceramics she used to make and hand-paint sit next to contrary dolls with intricate faces given to them by Molloy’s carefully manoeuvred paintbrush.

Scattered around there is raranga that is so precise it makes you look closer; the dyes used to colour the flax are a nod to Molloy’s flair.

Molloy dismisses it all with a sweep of her hand. “I just do whatever I feel like at the time. I do  lots of something and then I’m like ‘nah, I’m bored of that now’.”

She admits it’s usually when people start asking for something that she’s over it.

Nothing is out of her realm. If the next thing around the corner entails something she hasn’t done before, she will learn. Her current interest  is skill-sawing and she has a stockpile of old rimu posts and weather boards off old houses long pulled down.

She is a beautiful contrary soul who loves a good chainsaw but also creates delicate paintings with the slightest touch. Fantails flit between gnarly whirls on a rimu slab and a geisha rabbit stares zen-like from another.

“They all have their own little story. I have always loved wood and there is something about holding it in your hands and connecting. And far out, some of these bits of wood, they must be really old, because to skill-saw them, they were tough.”

In Molloy’s hands a discarded bit of nothing becomes something.

“I collected these bits in the rain and it made the colours amazing, dark and rich.”

Molloy has always had a pull towards making and creating. As a child she got around her dyslexia by drawing. It was her language, her communication and she did it all the time. “My books were covered in doodles.

“I was so lost at school and I just got bored, so I drew. I had to figure out an alternative to everything.”

She can paint, draw, make pottery, jewellery and dolls, she upcycles furniture, knits, crochets and weaves. She loves the process of figuring it out just as much as the result.

“I just love deciding I’m going to do something and just doing it. It takes me a while sometimes but I get there. I believe in that thing of if you have 20 hours of concentrated work you can do anything. It’s true, but it’s how you do it that makes it work.”

Molloy is sitting Buddha-like on her couch with a chihuahua on her lap looking up at her in head-tilted adoration.

“I have finally just let go and started doing what I want, what makes me feel good. I’m not trying to be something that I’m not; you have to do what you love.”

Molloy is starting to get her head around the fact people want what she does and are genuinely liking it. She is a humble being, to say the least, but is beginning to put herself out there more.

“I just have to accept that people like what I do and build on that. That might sound easy, but it’s taken me a while to get there.”

The Palmerston North City Council  has noticed and she has been commissioned to paint a large mural at the Linklater Reserve. She is also painting rocks for the council to include in the Palmy Rocks project. Molloy loves to connect and projects like these are another notch in the archaeology of who she is.

Each new thing is done with the same aim – making a living from doing what she loves. They don’t add up to a grand living – just a place in this world for her and her wondrous creations, her crazy dogs, uproarious laughter and colour bursts that break through the grey like a stain-glass window opening to the sky.

For more information on Pania Molloy’s art go to: www.facebook.com/snobbygoth