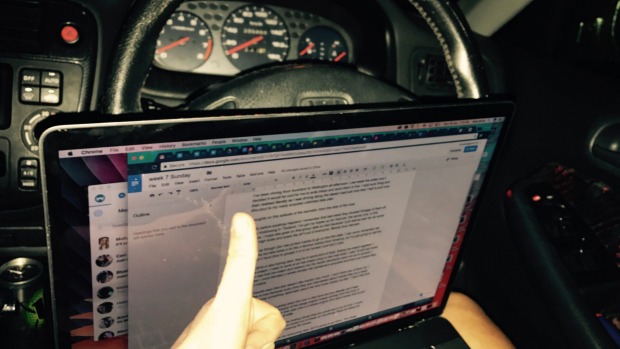 OPINION: I’ve been driving from Auckland to Wellington all afternoon. I decided it would be cool to do the blog live this week. However, in true Alice Brine style I only remembered this as I was driving along the desert road just now.

So here I am, pulled over at a petrol station in Waiuru. Shoutout to to my unlimited data plan.

Before anything happens, last week they showed footage of them all doing Kickboxing in Thailand. I’ve got my hopes up for Hannah, the sporty one. I hope she goes on that group date so bad because I just wanna see her do some gnarly high kicks and scare the s… out of everyone. I Love Hannah.

It looks as though Zac has picked Ivanka to go on the first date. This is off to an extremely boring start. I’d literally rather watch a piece of basil go on a date with a piece of bellybutton fluff.

The pair are in some kind of boat. Eating ice-cream together. I hate ice-cream. I used to work at an Ice-cream shop in the mall when I was 15 and we made our own real fruit ice-cream and believe me the health standards were not up to scratch. I once accidentally blended a whole tomato into someone’s smoothie and then just hoped they wouldn’t notice.

My girl Claudia says that she doesn’t like Ivanka very much. I don’t think any of them do. Every time they are interviewed about Ivanka they do a really s… job of saying something diplomatic about her and it just comes out like “I don’t like that b…..”

This is hilarious, they are going down the river in a boat and you literally can’t hear anything they are saying because of the shady Thailand engine noises. It does not sound safe. It sounds like someone glued a two stroke engine onto the side of a chainsaw and just sent it down stream on full throttle.

Dom is wearing those horrible Puma looking shoes. They look like they’re straight out of an S-Club 7 music video circa 2001. Truly awful.

The date with Ivanka is going s…. This is because the conversation revolves around absolutely nothing. I’ve had a better conversation with an actual floppy disc.

The sound quality is absolute garbage. They keep giving Zac a microphone and not micing any of the women. I assume that this is because women are not important and what they say does not matter.

YESSSSSS this is the kickboxing bit. I hope this is nothing short of legit fight club. Female fight club. Come on Hannah.

I actually do boxing myself so I am really enjoying watching everyone’s terrible form. Shocking form. No one has considered covering their face.

I am extremely disappointed with the outcome. Worst female fight club I have ever seen.

They are all in a competition where they have to hold their breath in a pool of ice. This is so they can try to win a date with Zac. Way too much of an ask to be honest. Imagine if you did that and then found out later that he had a tiny penis. You’d be so gutted.

We are up to the least interesting part of the show, the rose ceremony. I hope the one going home is me.

(OMG, I had my headlights on this whole time, if my battery goes flat because I had to watch the bachelor I’m legit going to be so cross.)

One of the women has realised that Zac does not like her and is not keen. She decides to tell him this as he offers her a rose. I believe this is beautifully savage. See how it feels Zac. Lol.

Zac and the chick he doesn’t like go off for a chat.

In the mean time, all the other women give up and sit down on the dirty outdoor pavement. It is hilarious.

I have included this screenshot:

​ It honestly looks exactly how my girlfriends and I looked after the sixth form ball had just finished. All our legs hurt, some of us had been dumped, and we were waiting for the cool mum to come and take us to the after party. Where the vodka cruisers at?