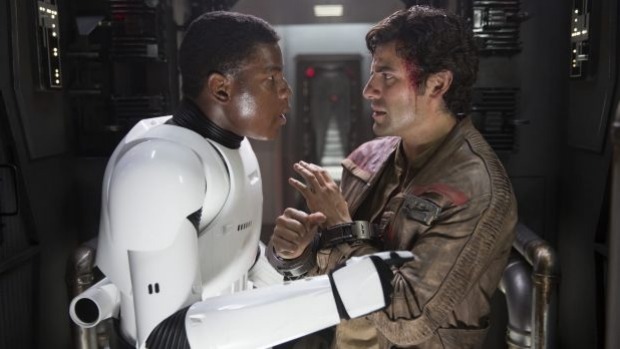 One Star Wars theory just won’t die, and it looks like it’s not going to go away any time soon.

Numerous Star Wars whispers have been shot down over the past few months, thanks in part to Lucasfilm bosses facing some tricky questions at the franchise’s 40th anniversary celebrations.

One fan theory that is persisting, however, is the idea that two male leads will end up romantically involved in a galaxy not too far away.

While Lucasfilm president Kathleen Kennedy recently dismissed rumours that Carrie Fisher would appear in the third instalment of the Force Awakens trilogy, she hasn’t been so eager to cut down the possibility of the Star Wars films getting their first ever gay subplot.

Speaking to Spanish-language website Ecartelera, the Lucasfilm boss left the door open to protagonists Finn (played by John Boyega) and Poe (played by Oscar Isaac) falling in love in future films – just not The Last Jedi.

“We’ve talked about it, but I think you’re not going to see it in The Last Jedi,” she said.

In case you’re unfamiliar with the popular fan theory, it pivoted around the strong chemistry between Finn and Poe in The Force Awakens.

In addition, fans say it wouldn’t be too much of a stretch for Disney to turn its attention to sexuality given it’s already injected much more diversity into the Star Wars universe (a woman is now the lead character and a person of colour is in the main trio).

And to top it off, the trailer for the upcoming film The Last Jedi shows Finn wearing an outfit that looks exactly like one worn by Poe.

So does that mean Finn and Poe will get together in the final instalment of the Force Awakens trilogy? Kennedy was, unsurprisingly, non-committal.

“In the next six or eight months we will have some meetings about the stories that we will develop next,” she said. “After 40 years of adventures, people have a lot of information and a lot of theories about the path these stories can take, and sometimes those theories that come up are new ideas for us to listen to, read and pay attention to.”

These comments could, however, just be masterful wordplay designed to fuel publicity.

After all, a crux of the Finn-Poe love theory is that their characters – along with Rey – are meant to mimic the trio from the original films (Leia Organa, Han Solo and Luke Skywalker). As we all know, Leia and Han end up together by the third film.

Furthermore, Kennedy has pointed out the new films aren’t trying to limit themselves by “emulating the [original] protagonists”.

Star Wars: The Last Jedi is due to hit Australian cinemas on December 15.