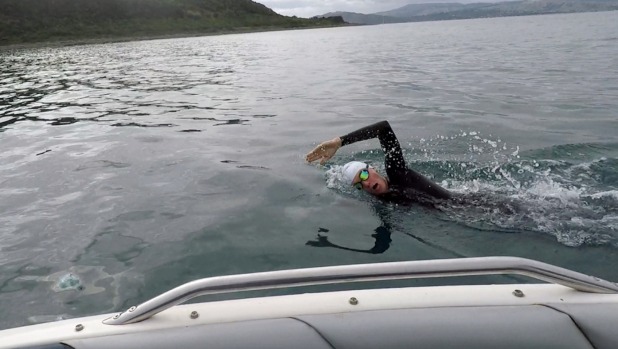 The 17–year-old is a student at Lower Hutt’s Raphael House, where  all year 13 students are required to undertake a project.

Peter, who hopes to become a professional jazz musician, decided to give ocean swimming a go.

“The idea is to engage people in new things, swimming was not a new thing for me but long distance ocean stuff definitely was.”

He started with Ward Island and followed that up with a swim to Matiu/Somes, which he enjoyed so much he repeated it a week later.

He recently added Mana Island and his next challenge is Kapiti Island.

Mana is seldom attempted because of its strong currents and Peter ended up spending much longer in the water than planned.

It, however, boosted his confidence and reinforced his passion for the sport.

“There is just something about being in the water and having no one else around you. That is the main thing I enjoy, just enjoying yourself in the water.”

He decided to try ocean swimming after looking at Matiu/Somes and thinking it  would be “awesome” to test himself by swimming there.

His thoughts have now turned to how far he can go in the sport.

“My goals are now a lot bigger.  I do not want to say the Cook Strait yet but that is definitely in the back of my mind.”

Cook Strait swimmers sometimes encounter sharks but that does not deter him.

“I can’t say I have seen one in the water but if I saw one I would definitely jump. I have a lot of respect for sharks and I am in their home.”

He plans to go to university and study either music or marine biology.

The school project aims to extend the students and he is also required to write a report on what he has achieved.