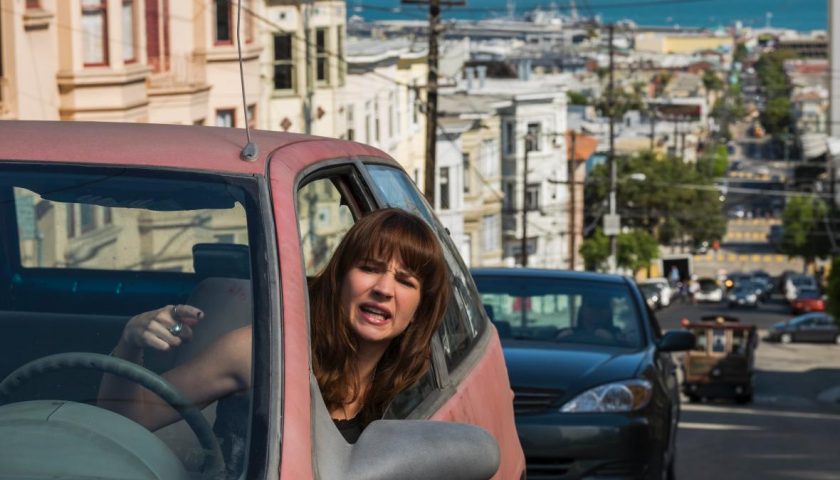 A TV show where fashion is practically a character in its own right: It worked for Sex and the City, it worked for Gossip Girl, and you can totally see how executives at Netflix must have jumped at the chance to greenlight Girlboss, a show based on the story of Sophia Amoruso. Amoruso became a self-made millionaire in her 20s by launching Nasty Gal, an online store for the kind of women who, unlike the librarians over at ModCloth, favor a more adventurous style. Late last year Nasty Gal filed for bankruptcy, accompanied by Amoruso’s exit, which was probably not part of the rollout strategy Netflix had in mind. Now what must have seemed like a cha-ching, cha-ching honest-to-goodness rags-to-riches story a year or two ago arrives at an awkward moment for the real-life people and company that inspired the TV show. Girlboss, the brand, still exists, as some vague entity with a sleek website, impressive advisers, and a foundation, but it feels a little weird, empty almost, to think about how you can be accused of all manner of misdeeds, your company can fail, and you can still be a #girlboss.

Being a #girlboss, as exemplified by Sophia, the main character of the Netflix show, means being a badass. Like the notion of a #girlboss itself, the idea of the badass heroine is not wholly uncomplicated—isn’t there a way to be a boss that doesn’t involve appropriating dudely swagger?—but those are discussions Girlboss hopes you will be too impressed by the bitchin’ heights of Sophia’s badassery to engage in. When the events of the show begin, our Sophia (Britt Robertson) is a 23-year-old college dropout scrounging around San Francisco who drives on an empty tank, bangs hot guys in bands shortly after meeting them, talks back to her boss at her thankless retail job (when she bothers to show up), and needless to say, gives zero Fs. After finding an eviction notice on her apartment door, she needs to find a way to make some fast cash. She visits a vintage store for a pick-me-up and finds a diamond in the rough in the form of a motorcycle jacket—“Suck my balls,” she says to herself upon discovering it, audacious chick that she is—she buys it for $8, sells it for much more, and realizes that this is her path to staving off eviction and, maybe, becoming an adult.

The badassery is a tough sell for Robertson, who looks too sweet to fully pull off the horrible-person-who-you-totally-love-anyway main character that a show like You’re the Worst is able to nail, partly because Girlboss’s writers also don’t fully commit to the task. Surely there are better ways to demonstrate a character’s rebel soul than having her steal constantly—a book, a rug, her boss’s sandwich? Robertson looks especially out of place and un-nasty in the episode when the show tries to portray her alleged punk past. Plus, those bangs: they’re way too earnest. Also, as the events of this show begin, we are in the year 2006. Partly, this is for verisimilitude purposes—Amoruso really did start Nasty Gal that year—but the show also milks the opportunity for mid-aughts nostalgia by having the characters watch The O.C. (specifically, the one where Marissa bites it), wear flare-leg jeans, and text on flip phones.

The fact that the bell bottom still reigned supreme in 2006 didn’t mean that the clothes on this show had to be  doomed to fuglitude, but by and large, the fashion is a wasted opportunity. Sometimes Sophia makes alterations to the vintage clothes she buys before selling them, and they are not cute. If you were hoping for lewks à la Carrie Bradshaw or Blair Waldorf, you’ll be waiting all season for a Patricia Field type to arrive behind the scenes and perk up the costumes.

Sophia is joined in her journey toward adulthood by a relatively bland cast of regulars, including her friend Annie, Annie’s boyfriend Dax, and Dax’s roommate/Sophia’s love interest Shane. This is in contrast to an oddly impressive roster of guest stars—a criminally underused RuPaul as Sophia’s neighbor, Breaking Bad’s own Dean Norris phoning it in as Sophia’s disapproving father, Melanie Lynskey as a rival vintage dealer, even Norm MacDonald as her boss at a short-term job. Now I think I know where the budget for cool clothes disappeared to.

Despite all its problems, though, Girlboss is kind of fun. It’s got too many episodes in its first season, and it takes too long for Sophia to go from screwing around on eBay to actually going legit with her business, but in the end it does turn out to have some “she’s gonna make it after all!” DNA baked deep into it. That the show was created by Kay Cannon, the screenwriter of the Pitch Perfect movies, makes a whole lot of sense: Really, this probably isn’t a show for millennials, or adults at all—it’s for tweens and teens who won’t care about the tarnished reputation of the real Nasty Gal, who will be amused by references to “balls,” and who won’t give a second thought to the idea of a period piece set in 2006.