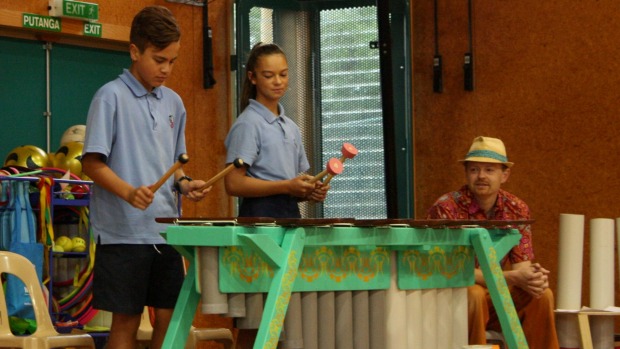 A celebration of sounds and music filled the hall at an Alicetown kohanga reo recently.

Both musical instruments were made for the Maori immersion school by its arts kaiako Makaira Waugh.

Year Eight students Shakayah Taiapa-Crews and Ngarangiwhakaupoko Hokianga staged  a performance with the contrabass marimba and a group of Year Six students followed up with their own musical show.

Waugh said the “fun and bouncy sound” of the instruments made them a hit with his classes.

“I’ve been working it into the lessons every day. It’s fun to play.”

Making the contrabass marimba was a challenge.   Waugh started by approaching plumbers in the area last year, asking for PVC piping offcuts.

When he came to Ellis Plumbing and Gasfitting, owner Mike Ellis offered to supply the pipes as well as paying for the rest of the materials.

Ellis said he loved seeing kids becoming involved in any of the arts and wanted to help out when Waugh approached him.

“It’s a great opportunity to be able to contribute.”

From there, it took Waugh a couple of weeks to make and tune the instrument in a friend’s workshop.

The contrabass marimba was decorated with the help of signwriters Phil and Anne Swain from Fine Signs and David Calwell from Wellington Signs.

This is only the start for Waugh.  With his instrument-building skills, he plans to spend term three at the kura creating a “sound garden” full of easy-to-play instruments for the students.

“I want to make enough instruments to have about 16 kids playing at once,” he said.

All musical pieces in the sound garden would be “pentatonic”, meaning they would have only five musical notes in every octave. Limited notes would make them easier to play and would create a better mix of sounds.