Spice has left a “trail of human misery” in the city, according to the Manchester Evening News.

A SURGE IN use of the former legal high known as ‘spice’ has put huge pressure on the emergency services in Manchester, leading to calls from a local MP for extra help to deal with the problem.

Headlines about the drug’s ‘zombie-like’ effects have been filling the UK media in the past week – and police in the city have said that they “cannot afford” for the problem to get worse.

So what is ‘spice’? Why are we seeing a spike in its use now? And do we need to worry here?

Spice is a form of synthetic cannabis of the kind formerly sold in Ireland’s headshops before legislation cracking down on ‘legal highs’ was introduced here in 2010.

According to the British government-funded drug information site Frank, the name is used for a whole range of different drugs that are supposed to mimic the effects of cannabis.

As synthetic cannabinoids act like cannabis the effects – good and bad – are likely to be very similar to cannabis. Some users will feel happy and relaxed, may get the giggles, feel hunger pangs and become very talkative. Others may feel ill or paranoid. 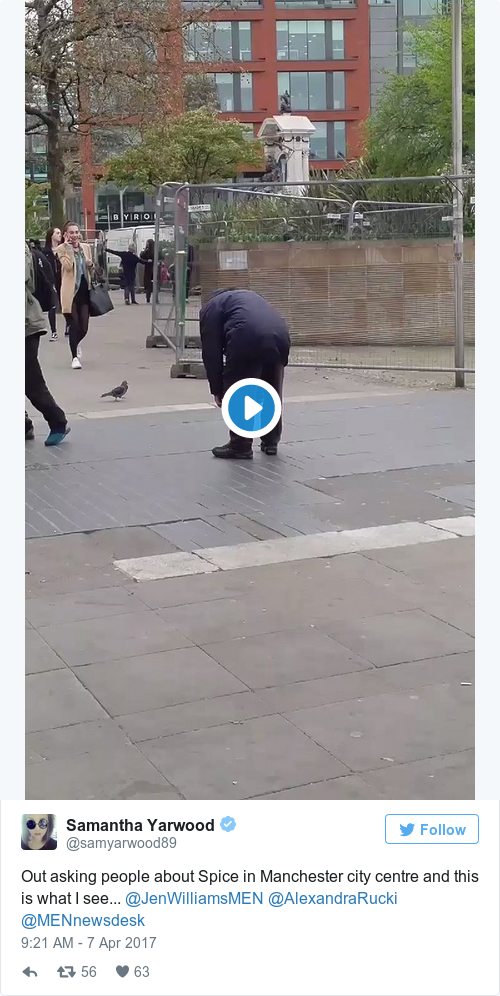 The Manchester Evening News reports that the substance being sold in the city is often much more potent than cannabis, however. One of the substances contained in the drug is the synthetic cannabinoid ‘JWH-018’.

This substance, the paper reports, was banned in the UK in 2010 – but its formula was changed several times as manufacturers attempted to escape the attention of authorities.

All forms of the substance were banned last year under the Psychoactive Substances Act – which cracked down on the country’s headshops in the same manner as our own 2010 law change.

What problems does it cause?

The drug can hallucinations, psychosis, muscle weakness and paranoia.

The Manchester Evening News devoted nine pages of Monday’s paper to problems caused by the drug.

Political and social affairs editor Jen Williams spent an afternoon examining effects of the drug and problems caused on the streets of the city, and described it as “dystopian, like a horror movie”.

“Things are going from bad to worse since the arrival of Spice, cheap and readily available drugs that have reduced many people to the sorry state you can see on our video report,” Editor Rob Irvine told HoldTheFrontPage.co.uk.

Homeless charity Lifeshare has claimed 95% of the homeless community in Manchester are now taking the the drug, the BBC reports.

Senior lecturer in criminology at Manchester Metropolitan University Dr Robert Ralphs, who has conducted research into use of the drug in the homeless community, told The Guardian:

“It’s quite common for people to say it’s overtaken their heroin or methadone addiction.”

The drug has proven popular among rough sleepers because it is cheap – £5 for half a gram. Users who are start taking it “can get 30 to 40 joints out of a gram,” Ralphs said. As tolerance increases, however, people can end up spending up to £50 a day.

What’s the response been?

Police have increased patrols in response to the surge in spice-related incidents – but senior officers say a multi-agency approach is needed to deal with the problem effectively.

“The truth is, tackling the issues caused by Spice is putting pressure on public services and is taking up a lot of our resources, particularly in Manchester city centre,” Chief Superintendent Wasim Chaudhry told the BBC.

“Those who take Spice are often left incapacitated or seriously ill and need the help of our partners in the NHS and ambulance service.

They can also become aggressive and become a danger to themselves and others.

It was “a problem that we cannot afford to get any worse,” he said.

I’ve written to the Home Sec urging her to visit MCR and meet with me, @patkarney @ManCityCouncil @GMPCityCentre & others urgently re Spice pic.twitter.com/90VXN82pdj

Labour Co-op MP Lucy Powell this week wrote to Home Secretary Amber Rudd to seek an urgent meeting over the drug. The situation had now reached “crisis point,” she said.

Professor David Nutt, the former government drugs tsar, said the problems highlighted this week were “utterly predictable” and proof that the headshop crackdown had not worked. 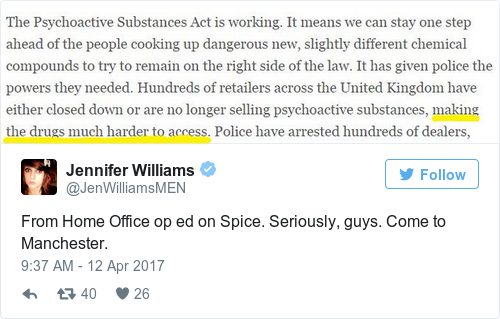 Manchester’s Crime Commissioner Tony Lloyd also told The Independent it had become harder for police to stop the sale of the drug as they now had to deal with criminal gangs, not just headshop owners.

What’s the situation in Ireland?

Issues with the drug have also been reported in Stoke, Birmingham, London and other areas of England, it was reported this week.

In Ireland, organisations working with drug users last year reported increased use of a drug described to them as “homemade” cannabis.

Other problems linked to an increase in use of some former headshop drugs have also been reported in recent years. A drug known as ‘Snow Blow’, for instance, was linked to a HIV surge in Dublin in 2015.

“Synthetic Cannabinoids have been available in Ireland for some time now,” Tony Duffin of the Ana Liffey Drug Project said.

Ireland has a poly drug use problem – meaning most people, who use drugs problematically, use more than one drug.

There is an increasingly wide array of unknown or illicit drugs being used every day in Ireland. Opioids, Stimulants, Empathogens, Psychedelics, Dissociatives, Cannabinoids and Depressants are all easily available and cheap to buy.

This is mirrored in the UK.

Across all jurisdictions there is a need for increasingly progressive drug policies that can better manage drugs in society – to reduce harm to individuals, families and communities.