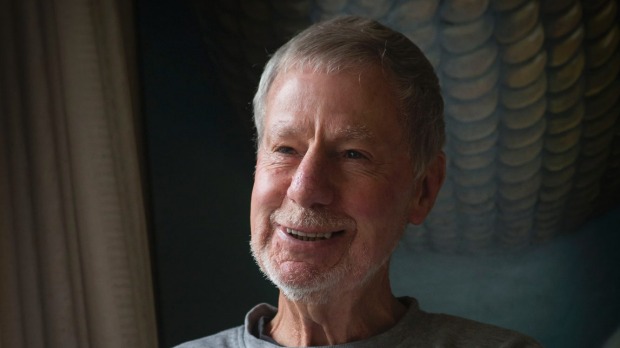 Each week, we ask a high profile New Zealand to share a photo memory. David Hill is one of New Zealand’s most prolific authors of young adult fiction. He was a high school teacher in “English and rugby” for 14 years before turning his hand to writing about 35 years ago. Since his first novel, See Ya, Simon, Hill has written more than 30 books.

Peter was the firstborn of two – he’s got a younger sister, Helen, who’s five years younger. He was very, very new – I think he’s only about five months’ old. My dad had been crook – you can see in the photo he’s pretty skinny and gaunt. We were up in Auckland and he lived down in Napier. We drove down and found him very unwell, very frail, and stayed for about a fortnight. He got stronger and better and the little guy played a big part, I think, in bringing him back to health.

My father was absolutely besotted with him. I love the photo because Pete’s just learning to smile – that wonderful smile that turns a baby’s face inside out. My dad is absolutely just overwhelmed, and grinning back at him.

Dad had been a wool classer and a brick maker and a ditch digger – he came from a generation which didn’t show their feelings. To see him so enchanted by the baby was quite a revelation, actually.

He had another good year’s health, and he died quite suddenly just a year after this photo was taken. It was brilliant that he had the time with Pete and that enormous happiness that came from it.

He was just 74. He’d smoked all his life, the old devil, and he’d eaten enormous amounts of fatty chops and that sort of thing. He was probably lucky he lived that long! He’d been a widower for about 10 years – my mum died when I was a teenager – and he used to cook for himself these terrible stews which he’d then leave on top of the stove for about three days and then reheat them. God knows how he didn’t go down with food poisoning.

I would have been in my twenties – my hair was a very different colour. I was terrified at first about becoming a dad. You get this astonishing little thing which is absolutely seething with life, yet at the same time, it’s so fragile – the big head lolls around on the little body, you feel that if you touch it in the wrong way it will instantly break… So there’s all those terrors of the new parent. At the same time, you know, you’re transformed. You know that the world will never be the same again, the moment that small mammal lands on the scene.

Pete lives in the UK – he and his lovely wife – and he’s an IT security specialist. His firm sent him as an advisor with the British army to Iraq three or four times. We were extraordinarily glad, needless to say, when that contract finished. He had to carry his own personal weapon wherever he went even though he was a civilian. Beside their bunks, they had these concrete coffins, basically, into which they were supposed to roll if there was any attack in the night. No doubt there’s other things he’s not telling us. But he’s back to civilian contracts now, including helping to install the computers for a Siberian dog food factory, which sounds absolutely wonderful.

David Hill’s latest novel, Flight Path, captures the realities of being a young man serving in the Air Force in WWII. It’s out now.