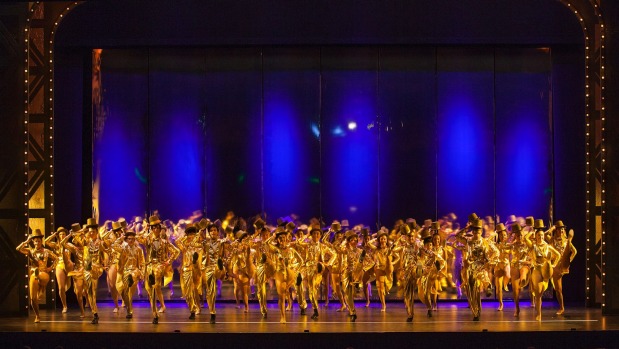 REVIEW: A glorious golden-clad finale of massed dancers was the reward at the end of A Chorus Line in Palmerston North’s Regent on Broadway.

Not a musical in the traditional sense, the multi Tony Award-winning show features 17 dancers trying out for eight spots in a Broadway show.

Looking to put together the ideal dance team, an exacting director calls the shots from a small lighted table in the middle of the darkened auditorium.

In a world weary, firm-but-fair interpretation by Andrew Jamieson, Zach​ gets each dancer to open up about their lives, and ultimately, what they will do when they can no longer hoof it.

A ‘triple threat’ is someone who can sing, dance and act. The 1970s Broadway hit requires an ensemble of such performers, and this ambitious production of a demanding show extends many of its largely young cast to their limits.

Set on an open stage with a striking proscenium-high pivoting mirror-wall backdrop, some cast members as young as 14, portray a range of wise-cracking, sassy, nervous and insecure New York dancers all vying for a role.

Director Dean McKerras has extended what was originally a one-hour 40 minute show without an interval, into a longer two-act production.

Given the mixed singing and dancing abilities and the limited stage experience of some of his cast, this doesn’t come off. Some sequences are too drawn out, while generally the dialogue isn’t snappy or sharp enough, meaning the show lacks urgency and pace when in non-dance mode.

Among the high points are Tobyn Gregory’s athleticism in I Can Do That; Frankie Curd’s compelling Nothing; the comedy combo with Michael Doody and Laura Wedlock in Sing; and the spunky Dance Ten, Looks Three by Cara Hesselin​.

​There’s the onstage spat between Zach and his former lover, Cassie, given spark by Ashleigh Blummont, set around the excellent choreography of One, the show’s signature number, all underpinned by Stephen Fisher’s assured 11-piece band.

A Chorus Line has its raw and raunchy moments, and explicit conversations around sexuality may not make it suitable for children.

The show runs from April 19 to 23. It is a fundraiser for the Arohanui Hospice.