Politically, the frenetic, unpredictable approach of the Trump administration has engendered one unnecessary nightmare after another, writes Larry Donnelly.

TRYING TO SOUND coherent about what is incoherent.

This is my stock qualifier when asked to evaluate the improbable rise or the inconsistent rhetoric of Donald Trump.

Now that he has been President of the United States for nearly 100 days, political commentators are embarking on the uniquely American and quite foolhardy task of assessing the performance of a man whose first term in the White House is still in its infancy.

That said, however, during the past three months, perhaps leaving aside the exceedingly unusual and optically horrendous amount of time President Trump has spent on the golf course or at his Mar-a-Lago resort in Florida, there has been an abundance of activity and controversy in these early days. 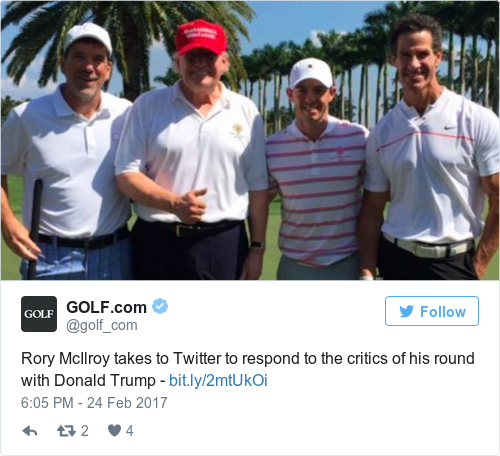 Rory McIlroy takes to Twitter to respond to the critics of his round with Donald Trump – https://t.co/Q2EJGQw1HN pic.twitter.com/viJzCO7brW

From an inaugural speech that, albeit grim and defiant, accurately reflected the broad sentiment of the people who voted for him; to a series of executive orders that his opponents asserted were both offensive and misjudged; to the rambling, bizarre and false pronouncements that flow incessantly from his Twitter account; to the recent, terrifying deployment of missiles and a bomb, accompanied by threats as to what might lie ahead – and much, much more in between – Donald Trump has made himself the dominant topic of conversation around the world.

For his most fervent admirers, and maybe for the president and his outsized ego, this doubtless seems like a good thing. But politically, the frenetic, unpredictable approach of the Trump administration has engendered one unnecessary nightmare after another.

After a divisive and very close run campaign, and given his always low approval ratings, President Trump would have been wise to take on board the sage advice of seasoned Washington hands and move with all deliberate speed initially.

Yet that was never on the cards. Instead, the president has chosen to conduct business his way.

Doing so has made many looking on from all sites on the ideological spectrum question his temperament and his competence.

Conversely, on two occasions where he has acted in a manner that might customarily be expected of an American president, it has been to betray legions of struggling men and women in ‘Middle America’ who put their trust in him.

A Trump supporter takes part in a rally in Vancouver earlier this month.

Hillary Clinton’s strongest line of attack on Trump last autumn was that he lacked the appropriate disposition to hold high elected office. The instances on which he has proven her right beyond a shadow of a doubt are already far too numerous to mention. On a near daily basis, his language or his judgment, or both, demean the presidency.

Additionally, that he is either not up to the job or not interested sufficiently to do it well – some contend persuasively that his never having served before in government or the military at any level renders him per se unqualified to be president – has been equally manifest since 20 January.

For instance, the farcical rollout of the first executive order on immigration from seven largely Muslim countries caused chaos at major airports and likely animated the findings of those judges who ruled the “Muslim ban” to be unconstitutional, even though the applicable legislation and case law are on President Trump’s side.

For over 8 hours thousands flooded into JFK, protesting Donald Trump’s executive order banning people from certain countries from travelling to the US.

While his failings on these fronts are regrettable, if not altogether surprising, it is where President Trump may have been most conventional in style and policy thus far that he has made what could prove his most serious political missteps: domestically, his unsuccessful collaboration with House Speaker Paul Ryan and the Republican congressional leadership to repeal the Affordable Care Act (‘Obamacare’) with little thought for those who might be adversely affected; and overseas, his ill-conceived decisions first to launch 59 Tomahawk missiles at Syria and then to threaten North Korea, as well as issuing provocative statements about Russia and Iran.

As he campaigned in 2015 and 2016, Trump the candidate repeatedly pledged to repeal ‘Obamacare’ to the delight of many who attended his rallies across the country. But two points are worth noting. First, only a small percentage of Americans have been impacted directly by the health care reforms; second, millions of those who are hurting economically and benefitted from ‘Obamacare’ actually voted for Trump in November.

To take away benefits from working class and poor people who propelled him to narrow triumphs in states like Pennsylvania and Ohio would have been politically dumb. These voters rejected Republican presidential nominee Mitt Romney in 2012 after he charged that they were a part of the ’47%’ of the citizenry that is useless.

Much of Trump’s messaging, including his crass profession of “love for the poorly educated,” was aimed at them.

Any initiative from President Trump to repeal the Affordable Care Act needed to simultaneously provide that they would not fall through the cracks.

Simply signing on to the hard-right Republican agenda on health care – indeed, some in the president’s party are so ideologically ‘pure’ that the legislation favoured by their leadership did not go far enough – missed that very important trick.

In a way, losing his first battle with Congress may have been a victory.

Another promise Trump made on the campaign trail was to put ‘America First’ and avoid military interventions unless the vital national security interests of the US were implicated.

The missile attack on Syria and the hawkish noises that have followed it suggest that the president is more of a neoconservative than anyone had anticipated. That his erstwhile critics, Senators John McCain and Lindsey Graham, who are rabid advocates of the use of armed force by any objective measure, now praise him is proof positive of a potentially significant shift in his foreign policy.

Polls taken immediately after launching missiles at Syria revealed public support for it. But in the wake of decades of failed wars with devastating consequences in the US and around the world, coupled with the isolationist impulse now resonating with an overwhelming majority of Americans, it is impossible to believe that President Trump is on to a political winner here.

Again, a pledge to avoid wars of choice was one of the reasons millions of voters who have been left behind and who have typically been the pawns of the foreign policy establishment backed him.

Speaking strictly politically, President Trump must keep Republicans on Capitol Hill from turning on him while maintaining his appeal with the voters who haven’t been served well by either party and were attracted by his assurances that he would do things very differently and, above all, prioritise his country and his people.

This was always going to be an extremely difficult balance, and at least on health care and foreign policy, two conclusions could fairly be drawn at present: there has been a great betrayal of vulnerable voters or a fundamental misread of his mandate.

The vast majority of Republicans voted for Trump, despite the fact that his is not the ideological conservatism promoted by think tanks and moneyed interests.

It is a conservatism that yearns for a time when life was simpler and wants to turn back the clock. To the extent that he does the bidding of Republicans in Congress, his vice president or right-wing intellectuals without remembering the people in ‘Middle America’ who put him over the top – not to mention almost 30% of Hispanics – he should consider this disconnect between the party’s leadership and its grass roots.

In an overarching sense, looking back at the first 100 days will do nothing to assuage the doubts of his opponents at home and abroad.

It may sound glib, but all we can do is hope and pray that Trump’s presidency won’t ultimately go as badly as one could reasonably fear it will over the next 1,365 days or so.

Larry Donnelly is a Boston attorney, a Law Lecturer at NUI Galway and a political columnist with TheJournal.ie and IrishCentral.com. He will be speaking at the Burren Law School on Saturday 29 April in Ballyvaughan, Co Clare on the Trump presidency and the future of American politics. More information is available here.