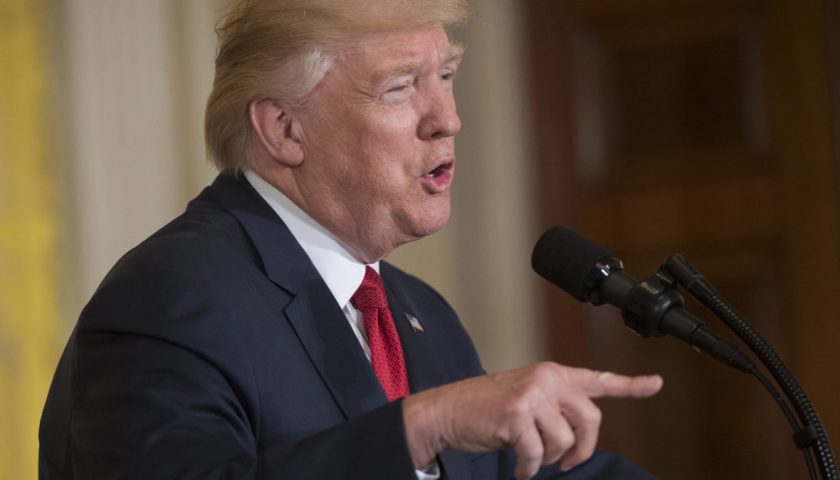 As hard as it is to believe, and as much as it pains me to say it, our president, Donald J. Trump, is not presenting to the public an honest legislative history of the American Health Care Act. He is, instead, offering an alternate history in which he did not issue an ultimatum for House Republicans to pass his bill or else move on, his bluff was not called, and his signature legislative project was not pulled from the floor in anticipation of humiliating defeat. This alternate history allows him to continue portraying himself as some sort of master dealmaker, a claim unsubstantiated by the facts of recent, real history.

“There was never a give-up [on health care]. The press sort of reported there was, like, a give-up. There’s no give-up,” Trump said at a Thursday news conference.

Let’s place this mythical version in context of what actually happened.

On the night of Thursday, March 23, after the Freedom Caucus’ demand to repeal the Affordable Care Act’s essential health benefits had sparked chaos in the House Republican conference, Trump dispatched Office of Management and Budget Director Mick Mulvaney to Capitol Hill to deliver an ultimatum. “[Trump] would agree to no additional changes,” the New York Times reported, “and Republicans must either support the bill or resign themselves to leaving President Barack Obama’s signature domestic achievement in place.” This was supposed to be it, the signature move from “the Closer”: Take it or leave it. However the bill fared on the floor, Trump was determined to move onto other priorities, like tax reform. (His advisers also reportedly wanted to use a floor vote to hold the president’s enemies to account, should the bill fail.)

It wasn’t the worst tactic ever. The fighting over the bill was going to continue indefinitely unless someone called a wrap and put members on the spot to live up to their promise of repealing (some of) and replacing (some of) Obamacare. There was even some optimism about the bill’s chances following the Mulvaney meeting. Then many Republican members went to sleep, woke up the next morning, and decided that ultimately they did not want to vote for a piece of legislation that was polling at 17 percent and would separate millions of Americans from their health insurance.

“I don’t know what else to say other than Obamacare is the law of the land,” House Speaker Paul Ryan said in a press conference after pulling the bill from the floor. “It’s gonna remain the law of the land until it’s replaced. We did not have quite the votes to replace this law. And, so, yeah, we’re going to be living with Obamacare for the foreseeable future.”

Trump, meanwhile, was already looking forward to that bright future when the ACA’s health insurance markets would collapse of their own accord, and, he believed, the politics would favor his ability to finally enact a replacement. “I’ve been saying for the last year and a half that the best thing we can do politically speaking is let Obamacare explode,” he said in the Oval Office. “It is exploding right now.” He also blamed congressional Democrats, whose votes were never solicited and whose input the Republicans sought to avoid by using the party-line reconciliation process, for failing to lend any support to the AHCA. Trump also made some very definitive sounding statements on the “give-up’d-ness” of the moment. “I’ve played this team,” he said, referring to the Republican Party. “I’ve played with the team. And they just fell a little bit short.”

In blaming Democrats, he also explicitly acknowledged that Obamacare would remain in place at least through this year. “When people get a 200 percent [premium] increase next year or a 100 percent or 70 percent, that’s [the Democrats’] fault,” he told the Washington Post’s Robert Costa.

“Here’s the good news,” he added. “Health care is now totally the property of the Democrats.” When you say that a policy is “totally the property” of your political adversaries, it would seem reasonable for media—or readers of the English language—to infer that you’ve “given up” on making it your property for the time being. It was Rep. Greg Walden, a lead author of the AHCA, who put the consensus state of health care reform best that Friday afternoon: “This bill is dead.”

Trump could have followed through on his ultimatum. He could have let the repeal process die and allow holdouts to spend the next months and years explaining why they refused to repeal Obamacare. He could have also recognized that the death of the AHCA, and the death of the conservative dream to replace Obamacare, would be viewed in the long term as a stroke of luck, removing a politically poisonous process and piece of legislation from the field of play.

Instead, the talk of the “last chance” was a bluff, he was called on it, and White House aides were the ones who had to come back to the House begging them to reach an agreement to satisfy their fickle, lying boss. Before the recess, it was Vice President Mike Pence who was dispatched to the Hill to broker a deal between moderates and conservatives. That fell apart. Now it is certain White House aides furiously building up expectations again and House leaders furiously batting them down.

What seemed to most frustrate Trump after the bill’s collapse in March was the recognition that he couldn’t just exert his will over Congress. It embarrassed him, and not repealing and replacing Obamacare would have been an enormous broken promise. So now he has to act like he hasn’t really tried yet.